Ampera bridge is the landmark of palembang. I am as local people of palembang can say "you haven't been to palembang yet, if you haven't taken picture with ampera as background" 😆😁

Ampera is located at city center of palembang. If you are from the airport, it will be 30 minutes until you arrived at ampera.

Ampera was built in 1965, so in 2020 ampera has 55 years old. 👏 At the first time, the named of this bridge was not ampera, the originally named was "Bung Karno bridge", but to respect the struggle local people of palembang when against holland at five days and five nights war, the named was changed to "Ampera" stands for "Amanat Penderitaan Rakyat".

Kuto besak castle or in bahasa indonesia "benteng kuto besak" is a castle that built for defense. The location is near with ampera bridge. We cannot enter the castle, the castle is military headquarters but we can take photos in the castle gate.

The next travel destinations in palembang is Monpera. Monpera is stand for "Monumen Perjuangan Rakyat Ampera". Monpera is a museum that save historical goods of palembang and the weapons that used when struggle collonialism ago. To entry monpera museum we must pay Rp 1.000,- for children, Rp 2.000 for student, Rp 5.000,- for adult and Rp 20.000,- for foreign tourist . One thing that you must remember, don't go to museum on monday, because museum will be close on monday.
Monpera is locate near kuto besak castle exactly behind kuto besak castle

Similar with monpera museum, sultan mahmud badaruddin II museum save historical goods but the difference is this museum save cultural goods more than historical weapon goods. This travel destination in palembang location near ampera bridge and kuto besak castle. If you want to entry sultan mahmud badaruddin II you must pay Rp 1.000,-for children, Rp 5.000,- for adult and Rp 15.000,- for foreign tourist.

Great mosque of palembang was built on 1738 and finished on 1748. This mosque blend indonesia, europe and china culture.

The location of great mosque of palembang is in the city center of palembang. Actually this is place of worship of moslem, but i think no problem if you want to visit this mosque although if you are not moslem, the important one you must be polite and cover genitals.

Actually LRT is mode of transportation in palembang, but i think LRT can be a travel destinations, because LRT Palembang is the first LRT in indonesia.

Do you know LRT, LRT is call for light train passed about palembang highway. Route of LRT palembang is from sultan mahmud badaruddin II airport to jakabaring. It just about 24 kilometers.

You can see view of palembang from the train. It can be fun travelling around palembang city.

Balaputera dewa museum is the next travel destination in palembang that i will talked to you.

Same like other commonly museum in indonesia, balaputera dewa museum do not open on monday. Balaputera dewa open at 08.30 a.m until 03.00 p.m
If you ever seen Rp 10.000 (the money of indonesia), there is limas house picture (traditional house of palembang). Well, the picture is from limas house in this museum 👏👏👏

The location of this travel destination is in srijaya street, palembang, near with indonesian red cross palembang office.

To enter this museum you just need to pay Rp 1.000,- for children and Rp 2.000,- for adult. You can see relic of sriwijaya kingdom in this museum. This museum save many megaliht stone and another historical relic.

The next travel destinations is great qoran gandus. Gandus is the name of location in palembang. Great qoran in gandus, palembang is the biggest wooden qoran in the world until now.

This qoran made by tembesu wood with size 177 x 140 x 2,5 cm per sheet qoran. There are 30 juz qoran. The great qoran is the favourite travel destination in palembang.

To make this qoran, the owner spent money about Rp 2 billion and need 7 years to make this qoran. The great qoran inagurated on 2011 by president of republic indonesia at that time Susilo Bambang Yudhoyono.

Sriwijaya ancient garden also known as karanyar site. This place is believed to be center of sriwijaya kingdom. In this ancient garden found network of canals, trenches and pond arranged neatly that believed made by human being.

To enter this travel destination you must pay Rp 5.000,- for one person. 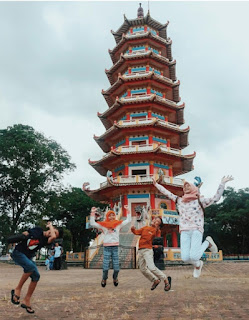 The next travel destination in palembang is kemaro island. Kemaro island is about 6 kilometers from ampera bridge. The location is near pusri company. To access kemaro island you must rent a boat or getek (traditional ship of palembang), it will take 20 minutes from ampera port (under ampera bridge there are many boat that ready to bring you everywhre) and you must pay start from Rp 250.000 for one speed boat until no limit if you cannot bargaining with boat driver.

The charm of kemaro island are the ninth unique chinesse pagoda, burial of sriwijaya princess, klenteng Hok Ching Rio, and many others.


Seguntang hill or siguntang hill is the highest area in palembang with 29-30 meters above sea level.

Because of this statue, the researcher make conclusion this place had been important place at sriwijaya era, because buddha statue used for worship.

Now bukit siguntang, beside being the highest area in palembang, become travel destination too. You must pay Rp 5.000,- to enter siguntang hill. Siguntang hill locate is in bukit lama, about 4 kilometers from ampera bridge.

Al munawar village or arab village is a settlement in 13 ulu, palembang that dominated by arab descent. The age of this village is 200 years.

You must pay Rp 5.000 to enter arab village. This village has managed by goverment tourism of palembang city, there are many spot photo here.

Beside arab village, there is kapitan village too in palembang as travel destinations. Kapitan in english is "commisioned officer" or "captain", nickname for people that  ordered to manage an area at collonialism era.

There are three kapitan house here. The location is in 7 ulu, palembang. You are free to travel kapitan village. The location near with ampera bridge.

This is the fifteenth travel destination in palembang that i told to you.